A Thornbridge too far?

Last year pubgoers all over Sheffield, and some way beyond, were praising the Thornbridge brewery to the heavens. Its outstanding, innovative beers had already won it a sturdy reputation. Now it was starting to do the business with pubs too. Its instant success at the Greystones seemed a case study in how struggling boozers – loved by neither their distant pubco owners nor their local populations – might be turned around by smaller breweries with great products and an ear to the needs of communities.

This week the news that Thornbridge is to take over the Bath Hotel has been received here in Sheffield with dismay. Not unanimous dismay. But enough to make you wonder whether the takeover will turn out to be a significant own goal. 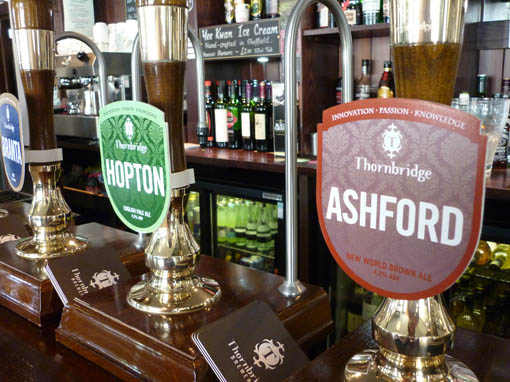 Some commenters have pointed out the paucity of guest beers in existing Thornbridge pubs. Since the company took on the Hallamshire House last year, for instance, only its own beers have been available on draught. Choice of beer wasn’t the pub’s strongest suit beforehand, though. There’d be London Pride and something local like Five Rivers, which were good, and Doom Bar, which wasn’t.

But one of the reasons Sheffield drinkers appreciate the Bath Hotel is its wide-ranging and frequently rotated beer list. Will this be under threat when Thornbridge moves in? Not according to its brewer Matthew Clark, who has promised that “lots of different beers will be on offer too, not just ours and, fingers crossed, not the same stuff you get elsewhere”.

A second theme of the concerns raised this week is the regularity with which the company is now taking control of new pubs. “Thornbridge are risking doing a South Yorkshire version of Greene King,” commented one user of the Sheffield Forum. “Is it just me, or is Thornbridge taking over Sheffield?” came a tweet from the nearby Red Deer (possibly with an anxious eye on its own takings). Another worrier asked: “Is there any pub in Sheffield not being taken over by Thornbridge or the Forum?”

Well, yes: at least 400 of them. Thornbridge’s estate of pubs extends to about six. The ‘monopoly’ argument is mathematically rubbish. We’re a million miles away from a Greene King situation. We don’t know the company’s expansion plans, but even if these continue at the current rate it’ll be a while before it approaches the sort of power wielded by even a smaller regional brewer such as Robinsons around Stockport.

But the Thornbridge brand started to suffer in this city a few weeks ago when the name of A4e – a company with close family links to the brewery – was tainted by some unfortunate revelations when the government’s ‘workfare’ policy hit the buffers (see Curmudgeon for more). In Sheffield, arguably the least Conservative of England’s major cities, some pubgoers of my acquaintance were quick to start disparaging Kipling and Wild Swan as “Tory beer”.

And there’s a justifiable anxiety that the price of a pint in the Bath could rise by anything from 50 pence to a pound. The Bath is currently one of the cheaper places to enjoy a beer in Sheffield city centre. Thornbridge pubs are not obviously concerned with affordability.

But for me, the observation that’s bang on is that, while it’s been great when Thornbridge has taken over somewhere rotten or moribund, the company should stay the hell away from the Bath for the simple reason that it’s brilliant as it is.

The Hallamshire House, like the Bath, was already an admired pub when it passed into Thornbridge’s hands. It may be a little livelier now than it was then, having drawn away some of the student crowd from the Closed Shop across the road. But the refurb did away with an unusual and entirely beautiful stained glass ceiling. It also introduced a room full of Victorian family photos with no apparent connection to the pub or the community and ugly enough to paralyse a horse. Before, there was an organic, accidental feel about its homeliness. Now it feels planned, calculated and templated.

In short, I like it less now than I did before. I fear the same will be true of the Bath. And, if I worked for Thornbridge, I’d be afraid that the company might now be starting to alienate the very customers to whom it owes its successes so far.

Poet and musician. Sheffield. Maps, coastlines, walking, whisky, and potentially dangerous levels of wist. Grimbarian. Pedestrian. King of the impossible. Big girl's blouse.
View all posts by Pete Green »
« In praise of the Princess Royal (again)
Into the void: the Sunday dinner pub »

12 thoughts on “A Thornbridge too far?”