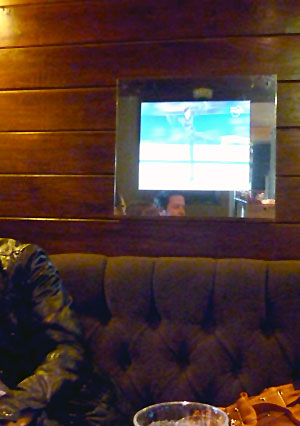 I’m not particularly offended by swear words in themselves – it sort of depends what people are using them for. So when I sit down in a beer garden for a nice, relaxing pint after work on a Friday, and see the word ‘cunt’ scrawled on a bench in three-inch-high capitals, it doesn’t send me cowering under a copy of the Daily Mail, closing my eyes, and wishing it was the 1950s.

But now that the weather’s turned nicer, people working here at the Beehive must come out to the garden to collect glasses, every hour of every warm day that the pub is open. Every one of them must have seen this conspicuous profanity, every time they’ve come out. Does the fact that nobody’s thought to get rid of it suggest a pub that just doesn’t care very much?

Not necessarily. True, the décor, the layout and the general feel are, well, boring. Other than a funny little sunken grotto thing – with a TV set into the wall, showing figure skating on Eurosport – there’s precisely zero to set it apart from a thousand Wetherspoonses, Yateses, and whatever other McPubs you can bear to name. But the service is friendly and – remarkably for West Street – there’s decent cask beer on tap at surprisingly reasonable prices. The Blue Bee Brewery has been pollinating here, and the fine results can be had for less than £2.50 a pint.

West Street houses the sector of Sheffield’s nightlife that is often euphemistically described as ‘lively’. Recently refurbed and returned to its original name, the Beehive as good a pub as you can expect given that inauspicious setting. It’s far from a must-visit but it’s way better than most places along the same strip.

Later the same Friday evening I’m making another first-time visit to a Sheffield pub, this time to the unambitiously named Ale House. When I lived over this side of town – it’s just out of Woodseats, towards Abbeydale Road – it was an anonymous-looking local called the Sheaf, which I never got round to trying out. The Sheaf was shut down the other year by its pubco and sold to a Sheffield beer appreciator, who did it up, renamed it and reopened it.

Many observers have hailed pubs like the Greystones as proof that even struggling suburban pubs can become viable if they take the radical and ground-breaking step of starting to sell good beer. It’s all very well for the Greystones: there are plenty of people living nearby who can afford good beer. The Abbeydale Brewery experienced less success when it tried something similar with the Office down in less well-heeled Upperthorpe.

It’ll be interesting, in that light, to see how the Ale House gets on – in a mixed-income sort of area, not posh but not on the breadline. Pleasantly, it’s not a posh pub, not over-scrubbed like the Stag on Psalter Lane. But nor does it lavish you in mam’s-front-room homeliness like the Wellington or the Fat Cat. The rooms still have that boxy, estate-pub feel. There’s something a bit 1960s or 70s about it which no refit will ever quite overcome.

This might not be quite what you expect from a real ale pub. But I’m going to argue that it’s a Good Thing, because it’s (a) completely unpretentious; and (b) something very distinctive in itself. The Ale House is not quite like any other pub I’ve been to. OK, so Bar 27 wasn’t either. But this time it’s in a nice way. 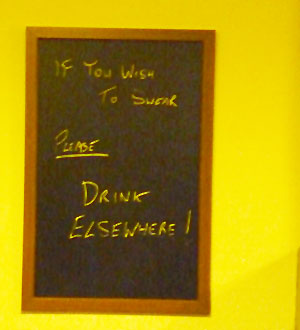 There are beers on from the Saltaire Brewery too. This makes a welcome change in Sheffield, where our justifiable delight at the stuff brewed on our very doorstep or down in the Peak District can sometimes blind us to the excellence of beer from elsewhere in Yorkshire. The prices are something to be welcomed too.

It’s not busy for a Friday night but it’s not dead. It’s not bursting with immediate life the way the Blake was on its opening night. But it’s doing enough, one hopes, to create a slow-burn buzz of interest among the community nearby. If you get the chance, pop in and guzzle at the Ale House, because it deserves to succeed. If you don’t, pop in and guzzle somewhere else that needs your support.

Over on the far wall a sign says: “If you wish to swear, please drink elsewhere!” Maybe someone read it and went to sit out at the back of the Beehive.

5 thoughts on “First time: the Beehive, the Ale House”