The last time I was at the Castle Hotel in Manchester it was 2007. I was on tour with MJ Hibbett and we played totally acoustic in the back room with The 10p Mixes. The audience numbered about 14. There was exposed electrical wiring, a stack of broken bicycles, rising damp, falling damp, and a really annoying couple in Manchester United shirts talking all the way through our sets.

The beer was good though (indeed, Mr Hibbett arranged the tour venues by choosing three cities he hadn’t played in for a while and Googling their names + “function room” + “real ale”). The beer is still good when I return on the Wednesday of this week, touring with my new band: four or five Robinson’s offerings and a couple of guests. The back room is completely transformed into something really quite nice. And it’s got quite a few more than 14 people here this time, which is also really quite nice. It does make the whole of the back room uncomfortably hot and difficult to breathe, but that’s a very positive kind of negative when you’re playing a gig. 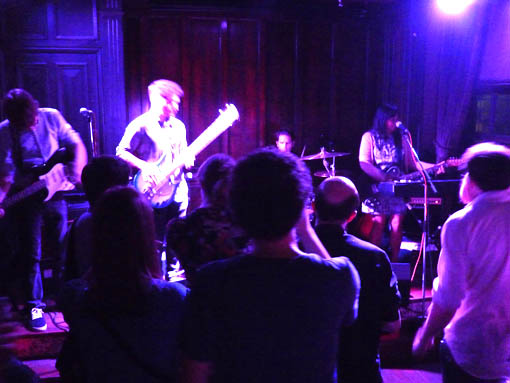 You know those old men in pubs who say: hey, I’ll tell you something, kid, I’ll tell you what, come here, I’ll tell you something, and you nod and encourage them to go on, and they lean forward confidentially as if they’re going to tell you the meaning of existence, and then they pause dramatically and, with great portentousness, utter something like you’ve Only Got One Life or you should Just Be Yourself and you have to hide your disappointment and nod thoughtfully as if this is the first time these concepts have ever been suggested to you?

There’s one of those at the Castle Hotel. Joe, his name is. He jumps on me before I’ve even got inside the pub, No, Joe, I explain, I don’t play the drums – look at my skinny wrists! I’m just carrying these cymbals for someone else.

“I like you!” grins Joe, and runs inside the pub to spend several hours dancing enthusiastically to four indiepop bands he’s never heard in his life and never will again. I can’t help liking him back. 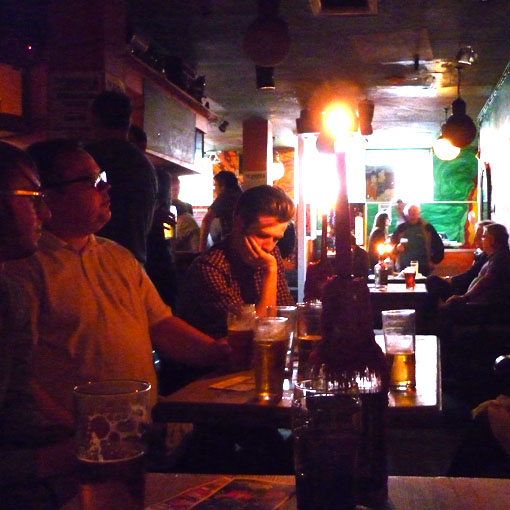 The next day of the tour we pitch up in Brixton and wait for the Windmill (pictured above) to open. Settling down on a bench just outside the pub, we do what any self-respecting band on tour would do, and crack open a bottle of Jack Daniel’s. We’re just starting to enjoy a quiet, sunny afternoon, and a quiet, powerful drink of bourbon when our calm is interrupted by the sound of thunder.

Oh, wait – it isn’t thunder. It’s the hellish snarling of an enormous dog on the roof of the Windmill which wants to eat us all. Trembling and sweating, we vanish round the corner to the White Horse for a pint instead.

At this point, even if you like dogs, you’d probably think it’s not so great for business to have installed on the premises a terrifying carnivore which sends potential customers scuttling away to a rival pub. Rather than follow the boring, predictable path of basically being right, though, the Windmill management have decided to turn their hell hound into some kind of special feature. When we return for a soundcheck and get inside, we find ‘Roof Dog’ T-shirts for sale behind the bar. I may have only worked in marketing for a relatively short time, but as unique selling points go I can think of better ones. Next time I visit, perhaps the Windmill will have discovered one – insulting your mother  as you enter, perhaps, or punching you in the face at the bar.

At the weekend the tour takes us to the relentlessly fabulous Indietracks festival, where we will somehow have the time of our lives despite not going to the pub. First, though, there’s Thursday, and Nottingham. We convene at the Dragon (pictured above), a fairly OK bar-type pub two minutes’ walk from the venue. It may not have the character of many other Nottingham boozers but it does have a sort of relaxed charm. It doesn’t try too hard and I like it for that.

By the same token, the Chameleon ‘arts cafe’ doesn’t try at all and I like it ever more. As the gig goes on, band members and punters occupy its storeys as one, meeting and sharing, chatting and grinning, rocking and knocking back bottled real ales, Polish lagers and an especially lethal home-made pear and cranberry cider. It’s a great venue for indiepop, because indiepop is a sort of music that doesn’t try too hard either. If only we had something like it in Sheffield.