The more careful readers of this blog will know that the best pub in Birmingham is the Anchor. The more tasteful drinkers of Birmingham will know that there ain’t much competition for the title. Either way, for me it’s a pub inescapably associated with bad times. Ten or twelve years ago I used to work just round the corner. For various reasons, it was a real low point in my life. For a couple of years, several times a week, the Anchor became the cradle of my woes.

The Fellows Morton & Clayton has become elevated, in my mind, from a decent to a legendary boozer by its association with wondrous Nottingham popshows and meet-ups with cherished, far-flung friends. Conversely, when I think of the Anchor, for all its character and champion ale, it’s unfairly tinged with melancholy.

What about you? Are there any pubs whose merits you subconsciously downplay or magnify, because they bring back good or bad memories? Please post a comment if there are. This seems potentially quite an interesting one, I think.

The reason I mention the Anchor is that I’ve consciously avoided it this week. On Wednesday I’m in Birmingham, and for once it’s not for work: I’m playing a gig down here. Rather than spend the afternoon in the mournful environs of my old work local, I opt for something more cheery. With its old Firkin suffix, the Flapper was the scene of my finest hours in pop music when I lived down here, a glorious small venue for what was then a glorious local band circuit. Pop music being the purpose of today’s visit, I decide to look in at the Flapper again now. Sadly it doesn’t seem to open until four o’clock these days, so Marianthi and I go to the Wellington (featured here; pictured above) instead.

Uniquely in Birmingham city centre (and, if truth be told, almost uniquely in Birmingham), cask beer is the Wellington’s raison d’être. Had it opened while I still lived here, it’s the sort of place that’d have made me think twice about leaving. Dutifully we set about some of the excellent sups on offer here, even if it still freaks me out to have to order beers by number.

At length we get over to the Island Bar (pictured below), where tonight’s gig is happening. There’s something lovably absurd about the Island Bar’s cheesy theme. Birmingham, of course, increasingly fancies itself as some sort of 22nd-century global megacity. But this grass-skirted, Pacific atoll take on ‘exotic’ would only have seemed sophisticated in Hemel Hempstead in 1982. It’s so naff you have to pat Birmingham on the head and smile indulgently.

Naturally, there’s no draught ale here at all, though a bar person enthusiastically recommends something out of a bottle which he insists is the best beer he’s ever tasted by a million billion miles. I can’t remember what it was now. It was alright though.

But it’s the music that counts at the moment. And the little room above the main floor is an excellent spot for another of our small but perfectly formed pop events. My old labelmate Fox is on super form, headliners Eux Autres are nothing short of sublime, and people say some kind things about us too.

When there’s no more drinking time on the island, we move on to the Victoria, which is almost next door. It’s lively and late and we enjoy talking back over the gig over a pint of something Wye Valley and nice. Or at least we do for half an hour or so – and then a bouncer tells us this part of the pub is closing and we all have to move round to the other side. I’m not sure as to the rationale for this, because the other side feels hideously hipsterish and vertical drinking and utterly unpleasant so, instead of staying around later and spending more money, we sup up quick and sod off home.

Back home in Sheffield, it’s Friday evening and it’s going out after work time. In many ways this is my favourite moment to be in the pub, at the crossover point from work into leisure, at the nexus of life’s means and ends. And the Rutland Arms (featured here) is probably my favourite place to experience it. I’m not just drinking three pints of beer here: these are three pints of kicking back and nattering with a group of friends as we warm up for the weekend.

At length Dan and I drop in to Henry’s for one. Henry’s wouldn’t be your first choice if you’re meeting someone: it’s so big that you’d never find them. It might be your first choice if you like looking out of enormous windows from a great height, though – or if you’re short of a few bob. There’s a wide range of very good and dead cheap cask ale on tap, and the house beer, Long Blonde, is only £1.95 a pint. Budgetlicious.

In that way that you do sometimes, when you’re on your way home and you’ve had a few, we poke our heads round the door at a pub on our doorstep that we wouldn’t normally be too fussed about. In terms of looking for a local, it didn’t really work out with me and the Old Heavygate Inn (featured here; pictured below). I’m not the only one, and it recently seems to have changed managers more times than Grimsby Town. There’s been a pub on this site for hundreds of years, so I do feel concerned for its welfare, even if I’d sooner go down the hill to the Blake or up to the Princess Royal. It’s a relief, then, to find a few folks in tonight, smiling through the gloom. Maybe I’ll be proved wrong and Greene King IPA will be enough to keep the Heavygate running for a few centuries more yet. 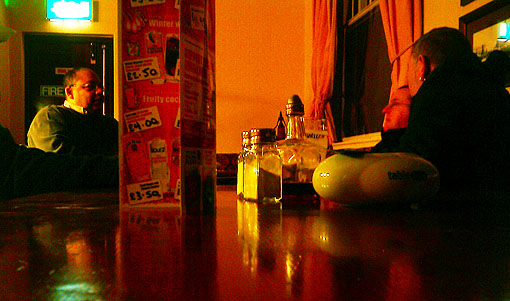 This week’s new middle-aged couple give a warm welcome as we arrive. This is just as well, because their enthusiasm isn’t yet quite matched by their expertise. Just before the football I decide on having one for the road. “Large scotch, please,” I say to one of them.

She turns to the array of bottles along the back of the bar. She looks them over two or three times, then turns back and addresses her partner.