To most people the two words ‘business meeting’ are probably up there with the most dispiriting phrases in the English language. Phrases guaranteed to sink even the lightest of hearts. ‘Business meeting’, ‘rail replacement bus service’, and ‘live and exclusive on ITV’. On Thursday, however, I am in a business meeting of quite a different kind. Rather than take me into his office, the potential new client I’m talking to has cast a glance at this blog and suggested that we get to the pub instead.

So here we are in the Sheffield Tap (featured here; pictured below). We’re supping a couple of cracking beers from the Saltaire Brewery: the light and lively Saltaire Blonde is a session beer incarnate, while Hazelnut Coffee Porter is resplendent with dark richness. We’re talking families and personal histories in between talking business (or it may be the other way round). And we’re having a fine old time. If all business meetings were like this, the British economy would be back on its feet and fighting fit in no time.

From there I head to the Rutland Arms (featured here). While I’m waiting to meet Mark and Kev, I bump in to Mitch. There isn’t a pub I can saunter into at random and be certain of bumping into someone I know, because I live in a city and it’s 2011. But the Rutland is the nearest thing. Mitch is someone else I don’t see that often these days. He has two children and, while we’re talking, he cites this as the reason he doesn’t get to the pub very much.

Knowing that I’m a parent as well, Mitch adds: “Expect that’s the same for you, eh?” I cough politely and change the subject.

Mark and Kev arrive soon enough. I guess they count as ‘old mates’ now that I’ve known them for more than a decade. It’s one of the regular nights we have together, when we’ll meet up early in the evening and catch up on everything that’s happened in the year or so since the last time we had one of these regular nights together. It’s quiz night at the Rutland and hence no place for this sort of sustained conversation. So we walk up to Henry’s for a few.

Henry’s is not a pub that’s full of character, or indeed characters. It’s not small and cosy. It’s not the sort of place you’re likely to get nattering to strangers and make new friends. Very often, a pub that fails to meet these criteria would leave me cold. But there are several things about Henry’s (pictured below on an earlier visit) that keep me coming back.

First, there’s a wide range of great cask beer. Second, the bar staff are really nice. Third, the really nice bar staff sell the great cask beer at very reasonable prices. Most of what we’re drinking here tonight costs around £2.15 a pint. By way of comparison, the cheapest pint at the Rutland is about £2.60, the dearest something like £3.30, I think.

Lastly, Henry’s has windows the size of cinema screens. This makes it an absorbing choice to sit by the window and gaze out while you knock back your lovely cheap beer. The view is not of an especially picturesque part of Sheffield, but because of the enormous windows you feel like you’re watching a fascinating documentary film about the modern provincial city centre. In tonight’s edition we learn how a man manages to drive a lorry full of beer for the nearby Wetherspoons through the narrowest possible gap between two cars parked on opposite sides of the road. He does it by reversing to alter his angle 19 times before two more men eventually lope out of the pub to put their hands on their knees while they squint at the lorry and then make a lot of waving hand signals.

The first few times I went to Henry’s, it was a big place with hardly anyone in it. This is never a very happy combination of events, as anyone will tell you who has recently watched football at Darlington. Tonight, though, it seems to be attracting people along at last. Give it a try if you haven’t already: it’s not the most fascinating pub in Sheffield but it has plenty going for it (especially if you’re on a budget).

Thursday night, as it turns out, is almost my entire week in pubs. On Saturday afternoon it’s band practice, though, and the Rutland Arms (pictured below) occupies an advantageous position here. Not only is it about two minutes’ walk from the place where we practise: it’s about no minutes’ walk from my bus stop for when I need to get home afterwards. It might not be the cheapest beer in town, then, but at least there’s the maximum possible time in which to drink it. 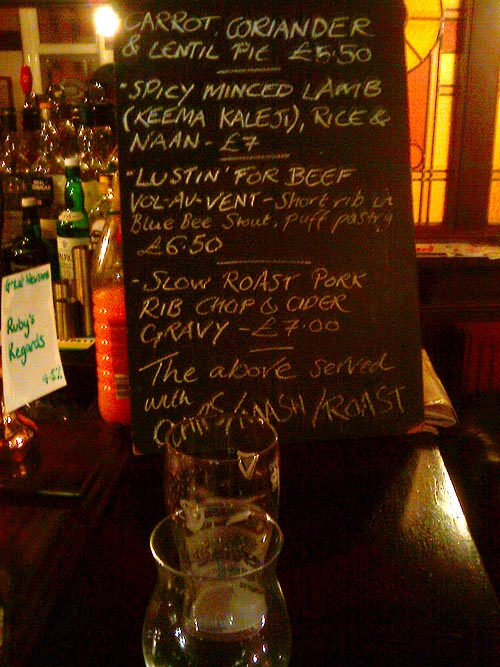