Last week Get to the pub.com visited the Walkley Cottage – only to discover the next day that it was about to close down. The manager has retired, but locals were uncertain whether the owner, Punch Taverns, intended to reopen the pub or sell it off. Since then I’ve received a statement from Punch, which reads simply: “We are resolving some issues and plan to re-open as soon as possible.” If I hear anything else, I will of course let you know.

This week I’m having a night out to share a special moment in a special place. It’s Tuesday evening and the Rutland Arms (featured here) is receiving a pub of the month award from the Sheffield and district branch of Camra. 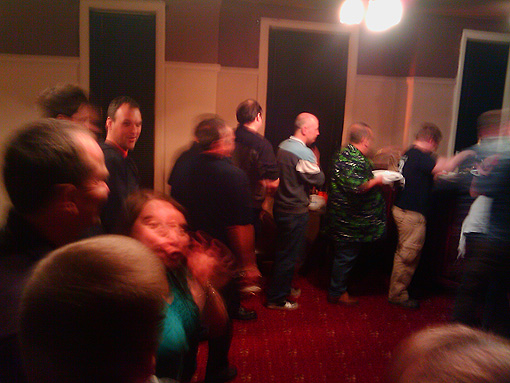 The queue for free butties upstairs at the Rutland Arms

It also typifies this community that I arrive with only Dan, but quickly end up in a two-tables-pushed-together group with Dan, Ian, Cara, Mark and Anna. I’m supping one of those spectacular IPAs that the Rutland does so well, which seem endlessly capable of offering up subtle but delicious new strands of flavour for which your existence on this planet hitherto has offered no preparation at all.

The palpable mood of celebration finds its way into Andy’s acceptance speech. Like all great showmen, he finishes on a high, asking us to remember the Rutland when the voting comes round for the national Camra pub of the year award, because the Kelham Island Tavern doesn’t have to win it every year. A lovely night – although, as Dan points out, you could tell Camra were in from the unseemly amount of prog rock issuing from the jukebox.

The following evening Dan and I put our heads round the door at the Grapes after band practice. Sheffield’s underground music community is in mourning for the loss of the Grapes as a live music venue. And rightly so. But it’s a pleasant change to see it as it is tonight – with some people inside. The owner has moved here from the very nearby Dog & Partridge and brought the Irish clientele with her. Now the Grapes is well on its way to becoming an authentic Irish pub: you can tell by the amount of swearing going on. Dan and I have barely taken our seats by the time the man standing next to us has repeated the phrase “Not fuckin’ Guinness!” half a dozen times.

Later in the week I’m in London for work. At half past five there are two options. The first is to attempt to travel across some of the busiest areas of the capital at Friday rush hour. The second: get to the pub.

The Albion on Hammersmith Road is already very busy, and the only place to sit is on tall stools, at a tall table. Does anyone ever feel remotely comfortable on tall stools or at tall tables? I suppose they must have their purpose, but I do find it difficult to kick back and relax in a pub when I exist in mortal terror that this top-heavy seating configuration will succumb to gravity at any moment, precipitously overbalance, and dash out my brains on an elaborate bar fitting advertising European lager.

By half past seven it’s getting proper packed and shouty, so Marianthi and I relinquish the towering table to head into town. A group of well-scrubbed young drinkers see that we’re leaving and, as we all do, ready themselves to inherit the table, like bereaved relatives hovering round a will. “He’ll sit back down again now!” jests one, after a few seconds of faffing and anticipation. I pretend to sit back down again, and they all laugh. They’re a kind audience.

The Albion’s not bad, but if it’s the best that this bit of west London has got, the rest must be pretty rubbish. So we head back into town, two lurching overground trains handing us off at Euston. Here we are compelled to stop off at the Euston Tap (featured here) by the knowledge that they are currently serving Ginger, from the superb Marble Brewery of Manchester. Accordingly, Marianthi insists that the Ginger is the best beer she’s ever had. I’ve heard a lot about Fyne Ales so I grab a half of their Vital Spark, a smoky dark night of an ale. It’s decent but not life-changing.

After a shockingly cold November and December, it’s all I can do at the current temperature of 10 or 12 degrees not to sunbathe. It feels equally odd and agreeable to stand in just a T-shirt and linen jacket in the little alfresco drinking triangle outside the Tap (even the most horticulturally optimistic of souls couldn’t call it a garden). A ravaged Irishman comes up and taps us for money, and a couple of chaps brazenly wolf a huge pizza from a box.

After that we head round the corner to the Bree Louise in search of somewhere to sit. We only just manage it, as it’s packed out in here as well. There’s a really helpful and friendly bar person, who is young with a beard, and offers generous samples of draught beers to try out. After a couple of glasses of new things, I have a pint of something very old: Theakston’s Old Peculier. Bless Theakston’s Old Peculier. It tastes exactly the same tonight as it did when I drank four pints of it on my birthday in 1992 and got absolutely hammered.

The pub can be a great antidote to – or, if you prefer, a great reward for – Saturday afternoon shopping. So it is that my girlfriend, our son and I join Dan and Cara for a quick pint back in Sheffield’s Rutland Arms this week. One glimpse at the new menu and we’re almost cursing our impatience at having had lunch before we set out. A look at Dan’s yumsome veggie calzone and we certainly are. Oh well – a chocolate brownie it is, then. 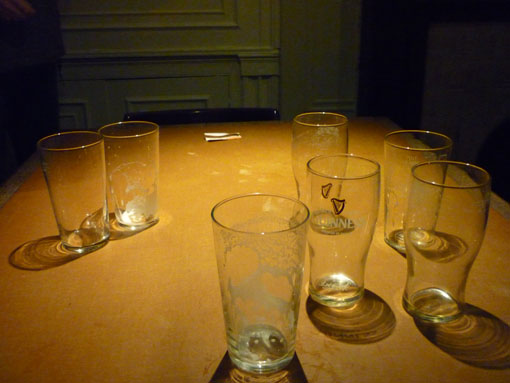 And finally this week, my band is in Manchester on Sunday afternoon for a session in the recording studio. We roll out at half past eight – me, Dan, and Pete and Steve who are producing and engineering the tunes. We walk up to our usual Manchester pub of post-studio choice, the Lass O’ Gowrie, only to rule it out immediately, as it is uncharacteristically full of Young People with their Loud Music. Also it costs five quid to get in.

We walk some more and reach a pub which is, quite remarkably, called The Pub. We walk into The Pub. Pete points out that the clips on all three cask ale pumps are turned round, signifying the total unavailability of anything nice to drink. We walk out of The Pub.

We walk just a little more and reach the Sand Bar (pictured above), which is, quite unexpectedly, lovely. Low light, great beer, interesting mix of people, and a dead tempting menu which has us all cooing about coming here early before we go back into the studio next Sunday. So there’s a happy ending to an interesting week in pubs. In retrospect it’s probably a good job The Pub didn’t have anything nice to drink, and thus didn’t count as a pub visit for the purposes of this blog. If Get to the pub.com had officially got to The Pub, we would have had to officially shut down the website immediately. Assuming the entire fabric of the universe didn’t fold in on itself first, or something like that.