But might it bring the death of the pint? Pete Brown, the doyen of beer writing, says no way. Most folks I’ve spoken to say trendy bars might embrace the schooner but most ordinary pubs won’t. But imagine a situation whereby the change in legislation is followed by sudden and ever more draconian increases in beer tax. Say a couple of years after the schooner is introduced, a two-thirds measure is priced at about what a whole pint cost beforehand. Yes, it would take a lot for Britons to relinquish the pint, but if anything can do it, perhaps a massive price hike could stun us into taking smaller measures as the norm. Never? Well, remember – at one time people said your average UK drinking man would never give up bitter for lager.

Just a day after visiting it this week, Get to the pub.com started hearing rumblings about the Walkley Cottage closing down. What we do know is that the manager has retired; what we don’t is whether Punch Taverns, the pubco that owns the place, is committed to keeping it as a pub or selling it on for ‘development’. Rumour, for what that’s worth, suggests the usual pubco trick of imposing unviable terms on the licensee to force them out and free up the site for profitable destruction. I’ve asked Punch for a statement and they’ve said they’ll come back with something; when they do, I’ll post it here.

For them as doesn’t know, the Walkley Cottage is (or was) a decent, Sunday dinner sort of pub just along the road from me here in Sheffield. There are (or were) some nicely kept cask beers on, including the odd well-chosen guest. I like it best for its big, child-friendly garden with rolling views, and there aren’t many good pubs nearby where you can watch the football scores come in on a Saturday afternoon.

My most recent (and perhaps final) visit is to watch the football scores come in on a Monday afternoon, however. It’s the bank holiday right after new year. (My team won 7-2 the other day, so for a change I feel faintly optimistic over their chances today.) It’s not happening today, though (perhaps because the locals’ team, Sheffield Wednesday, have already played their game at lunchtime), so we bugger off to the Blake Hotel instead. The beer is amazing, and comparatively dead cheap.

By this point our group numbers several. In that wonderful way that daytime drinking sessions have, it’s attracted along one or two other friends who weren’t there at the start. And at some point, somewhere on my second pint at the Blake, I hit that sweet spot of beery relaxation and imagination. I reach that optimal point whereby the liquor works its liberating power on the mind before it exerts its enervating effect on the body. And my conversation reaches its wittiest and most sparkling best. Well, it does for about 25 seconds, anyway, and then we all decide we’re desperate for some chips.

When you’ve been drinking for a few hours, as we have by this point, all kinds of things that would not normally enter your radar suddenly seem like a great idea. Instead of wearing traffic cones or marrying each other, though, we decide our lives would best be fulfilled by getting our chips from the takeaway opposite the Shakespeare on Gibraltar Street, which necessitates walking a mile through an icy gale. 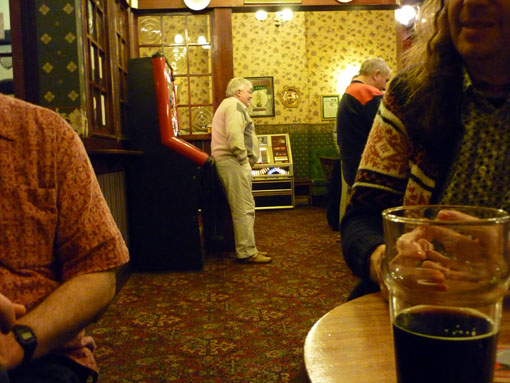 After this exhibition of arctic foolhardiness we take ourselves to the Ship. The Ship (pictured above) sits prominently on the main road opposite Shalesmoor tram stop. But it’s never mentioned in despatches from the legendary Kelham Island/Shalesmoor pub run. It’s almost like people pretend not to notice it, like a wayward cousin at a funeral. Indeed, for some time I took a notion that it was somehow ‘scary’ and/or wouldn’t have any good beer. Assured that the latter, at least, is not the case, we roll in tonight to investigate.

There is, of course, no Slaughtered Lamb moment. The Ship is perfectly welcoming, and the beer is good: a coal-black pint of Acorn’s Old Moor Porter slips down as smoothly as you like. With several different patterned wallpapers and a patterned carpet, the décor is a bit overwhelming, but I enjoy the nautical paraphernalia around the bar. Suddenly it’s half past midnight and for an indeterminate length of time, while the conversation has continued around, I’ve been soundly asleep in my seat.

So that was my big bank holiday Monday session. This has been a slightly peculiar week in pubs in that my drinking has lopsidedly bookended the week. At the end of it I enjoy the Sunday quiz at the Gardeners Rest. Considering our team is missing key members, we do well to push the winners close and come within two points of their score. The highlight of the evening comes when our friend Jeremy entertains more than just our table with the line: “Dialysis, eh? It’s just taking the piss.”