Today I’ve been to my mum’s graduation ceremony at York Minster. So I’ve spent two or three hours sitting in one holy building, and I’m about to spend a few hours more sitting in another – the Blue Bell. The beer, the service and the look and feel of the place all make it a very good pub. But the conviviality is on another level entirely. The sheer unquestioning willingness of the Blue Bell’s community to welcome the newcomer – for it’s far more a community than a mere clientele – elevate it to pub greatness.

The Bell’s exterior gives not a hint of the happiness awaiting within. A fairly nondescript frontage is not made any more promising by a Pubmaster sign. Just inside, though, things start to get more interesting. One door leads right to a “public bar”, says a sign; a second, ahead to a “smoke room”. I go for the bar.

It’s a cosy little sitting room of a space with a nice fireplace, plush with wood and comfy seats. It’s also one of those pub rooms where the shelves behind the bar are stacked to bursting with bottles, crisps, glasses, nuts, signs, boxes, optics, pump clips, and a large card decorated with an array of foreign banknotes. “A pub is for life, not just for Christmas,” says one sign. Right on. 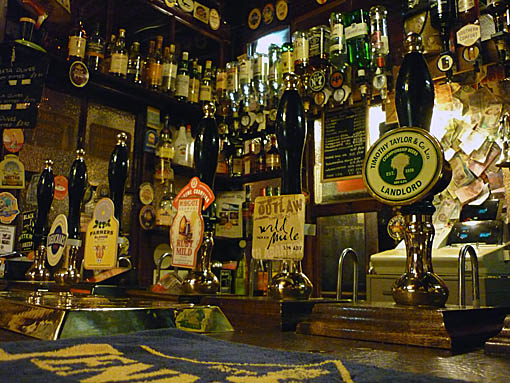 Two chaps who’ve seen a bit of life are chewing the fat with the bar lady. I buy a pint and sit at a small table next to the door. “Shaun Ryder!” says one of the chaps. “That was his name! Shaun Ryder. They said he was in a band called the Happy Mondays. Can’t sing a note to save his life!”

Sometimes there are pub conversations you don’t feel entitled to join in with. With this pub conversation, I feel like I’m being invited to. Maybe it’s the small room, where you can’t help but overhear and face your fellow drinkers. Maybe it’s the subject matter, harking back to the springtime of my long love affair with pop music. Or maybe it’s just a look, in the expressions on people’s faces, that’s beckoning me in.

Ryder’s limitations as a vocalist are easy to agree upon. Within five minutes of filling out the context of ‘Madchester’ and the baggy movement in indie music circa 1990, I’m back on my feet and deep in conversation with John about songwriting, genres, and the eternal difficulty of making any bloody money out of the whole thing. I guess it helps that we’re both musicians (albeit, I suspect, of wildly varying technical ability; it’s not even necessary to hear John play to know that he’s a Proper Musician). But the Blue Bell is a pub where you can’t help but make friends.

By his own admission, John is a big talker. But he isn’t one of those big talkers you meet in pubs who deal only in monologue and aren’t interested in the people they’re talking to. He asks me stuff as well. We natter on about pubs, beer, education and all sorts for an hour or so until John sets off for his home in one of the villages somewhere in the open space between here and the east coast of Yorkshire. It’s been a delight. We both say so, in fact.

There’s still plenty of time before my family emerge from their hotel rooms to join me for a night out, so I perch on a bar stool, order another pint of Rudgate’s Ruby Mild and wait for something to happen.

I make a call to my girlfriend, and the bar lady brandishes a ‘no mobiles’ sign at me, firmly but in fine humour. A corkscrew jumps towards me off a cider box, and a loquacious Scotsman to my left urges me to catch the joke false teeth that threaten to follow the corkscrew. As the place fills up, I notice that – other than the small groups of posh student boys who drop in for one pint and then move on – absolutely everyone who comes in seems to know everyone who’s here already.

And it really is getting full. If the Blue Bell is a place where you can’t help but make friends, this is partly because the people are so nice. But it may also be due in large part to the fact that one’s ears are never more than 18 inches from the nearest conversation. A cryptic crossword is being passed round between three or four people who could either be lifelong friends or, just as easily, meeting for the first time ever.

Tempted, but not enough lubricated, to join in, I eventually get chatting instead with a woman of about my own age called Catherine, or Kathryn, or one of the other spellings thereof. I’m going to have to guess at Katherine, and will apologise in advance if a comment to the contrary appears at the bottom of this web page.

Katherine is dead sound, and we are soon jointly decrying the way folk claiming benefits are increasingly demonised by the right-wing media. As you do. Soon we’re joined in conversation by a lass called Amy who’s working the bar, wearing a cute fringe and an eco-warrior woolly jumper. “Do you like this place, then?” she grins. Is it that obvious? 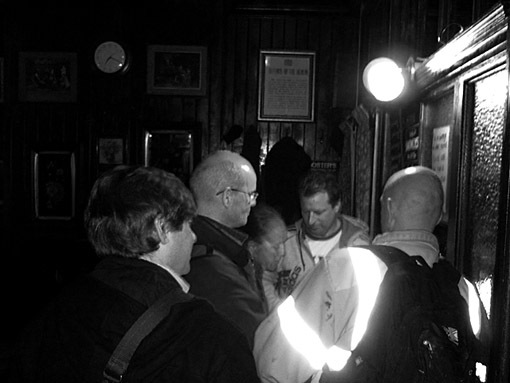 Day becomes night, busy becomes bursting, and at length we decamp to the hallway linking the two rooms, joined by Katherine’s friends Jim and Mark. Mark is from Sheffield, so we do what two people who both know Sheffield well are obliged by law to do when they meet for the first time, and talk in great depth about the ‘Valley of Beer’ pub crawl from Kelham Island through Shalesmoor.

My mum and her partner find their way here and are absorbed into the little society of the Bell as enthusiastically as I was. That four of us have so effortlessly become six demonstrates that the spirit here isn’t just the real or imagined product of my becoming slightly tipsy. This will be no place for my brother and his fiance, though, so when they come into town to join us we’ll have to find another place: a compromise between their preference for modern bars and ours for proper pubs. Our new friends even manage to make an excellent recommendation for this, and after lengthy, regretful goodbyes we settle happily into Pivo, a very good bar-style pub or pub-style bar just up the road.

Just for the record, the beer at the Blue Bell is terrific, with a range of five or six cask ales, including Kelham Island’s Pale Rider – just to make me feel at home, as someone points out, as if I didn’t feel at home enough already. Sure enough, I will spend much of the next day wondering how soon I can visit this marvellous pub again. And even if the only drinks available were Fosters and Malibu, I’d still be planning a return, just to talk to the people. Of course, it’s nothing unusual to get talking to people in a pub. But the warmth and welcome here are very special indeed.