Friday night at Sheffield’s Rutland Arms is a little different this week. In the function room upstairs, taking place as part of the Off The Shelf festival, is an evening of stories about the Rutland Arms. I’m here to read the piece I wrote about the pub for this website back in January. The night is hosted by a group called Walkley Feral Writers. Their work is amazing in its variety and I’m staggered by the sheer range of approaches to the business of writing about a pub.

The writers also look and sound more assured than me. I know what’s needed. Unfortunately no-one here is qualified to administer strong tranquillisers intravenously, but a pint of Gorlovka stout from the Acorn Brewery goes down a treat.

My turn, then. As a musician doing spoken word, I’m a fish out of water, swaying backwards and forwards as if to some invisible rhythm section. But the Gorlovka has done its job. Though my heart is still rippling, my nerves are just enough subdued to control my voice and breathing, and I manage not to rush it. At the end the audience responds generously, and I can relax and enjoy everyone else’s stories. And the beer.

Indeed, by the end of the evening I seem to have worked my way through a fair section of the beer roster. Against my better judgement, I agree to end on Brewdog’s Hardcore IPA. It’s 9% abv. And I don’t tend to enjoy these dead strong beers: anything above 6% nearly always seems to me cloying and top-heavy. Maybe my early twenties saw too many bad nights on Firkin Dogbolter. Either way, the Hardcore is sublime: bold and pugnacious, of course, but with a surprisingly airy finish, bright and smooth as brushed steel. It must be handled with care, of course, and the slight beginnings of a headache in the morning vindicate my decision to take only a half. 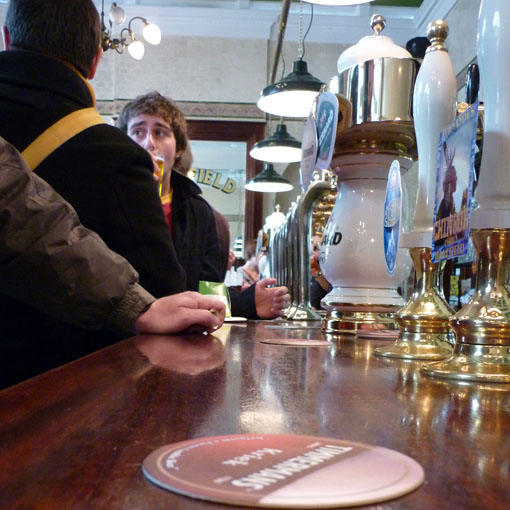 Good job that cranial throb is only mild, as I’m due in the Sheffield Tap at midday. Beer bloggers and Tweeters from far and wide are converging for a meet-up in Manchester, but I’m getting together with some friends to watch some football down the road in Dronfield. The occasion is an FA Cup game between Sheffield and Tipton Town. This offers a chance to witness history unfolding (the winners will reach the first round proper of the cup, which Sheffield, the world’s oldest football club, haven’t done since 1880 or something). But I’d be lying if I denied the secondary influence of a chance to sup some tasty Thornbridge pints in the Coach & Horses.

The Tap is taking up position as a Saturday lunchtime starting point for travelling football supporters with discerning palates. There are plenty here early on, as well as the mainstream railwaygoing public. One of our group is a Worcester City fan called Daz. It’s the first time I’ve met him, but we natter easily as lifelong pals, such is the congenial effect produced by the occasion and the pub.

Beer note! Thornbridge has recently produced a keg version of its Kipling pale ale, which is a controversial and courageous step, since back in the early days of Camra and what have you, keg bitter, of course, was the devil’s work. Shall we give it a go​? It slips down very easily, like lager. It’s cold and gassy and it makes me burp a lot, also like lager. In the mouth it doesn’t exactly burst with flavour, but the hops rise through agreeably at the end. It’s not really hitting the spot on a cold, wet, late October day, but on a hot afternoon in summer it could be mouth-watering. Either way, it costs £3.50 a pint, which is certainly eye-watering.

One nine-minute train ride later we’re in Dronfield, en route to the Coach & Horses and the home of Sheffield Football Club. The attendance at the match goes above a thousand; this is three times the average here. As well as Black Country folk supporting Tipton, the game has attracted a lot of neutrals. We neck our pints standing outside at the front of the pub, and Daz makes friends and swaps email addresses with a family of Rotherham United fans. This is football supporting at its most relaxed and enjoyable, and to a huge extent it’s the pub that makes this possible.

Back in Sheffield after the game (a tense but enjoyable affair which finishes two goals apiece) we default to the Rutland Arms for a couple and then resolve to see out the evening at the Princess Royal in Crookes. Outside the pub, we put our arms out to stop the 95 bus. It’s another triumphant moment for First South Yorkshire’s customer service as the driver ignores all four of us and drives straight past. Strictly speaking, this isn’t in any way related to the pub, so it shouldn’t really be mentioned here at Get to the pub.com, but if I didn’t get if off my chest here I’d end up having a nervous breakdown.

The Princess Royal takes a while to get going tonight, but get going it surely does. Across the course of the day – an extended but carefully paced session lasting about twelve hours – I’ve taken ale variously with my girlfriend, Mark, Kev, Daz the Worcester fan, Dan, Ian, Rob, Jono, Jono’s friend Kim, and latterly my mum and her partner Jim. The pub has been at the centre as I’ve seen a fascinating game of football, met some interesting new people, and experienced some unique and delicious beers. As we take ourselves home in the first hours of Sunday morning, I’m astonished and a little horrified to realise the day has cost me 40 quid. It’s been a good ‘un, though. 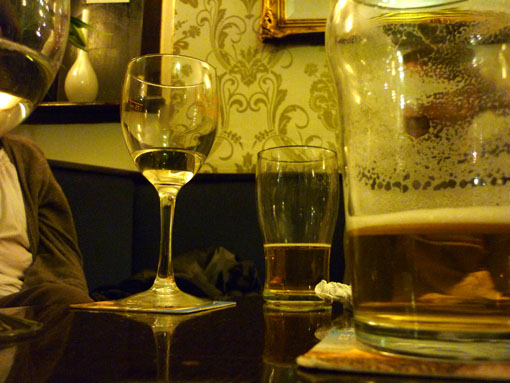