Hello, readers. We’ve had some news from the Coachmakers Arms, an exceptionally fine pub in Hanley, Stoke-on-Trent, visited by Get to the pub.com last December. The city council, you might remember, has published plans to demolish this pub and replace it with a car park, which would quite clearly amount to an appalling act of vandalism and disservice to the people of the city.

Pubgoers in the area were alarmed, then, to discover the Coachmakers closed up recently, fearing that the wrecking ball was looming. It turns out that the existing managers have stepped down, but that the pub will reopen shortly after a small refurb, run by one of the existing staff. There are no new developments on whether the council will go ahead with its abominable plans, but in the immediate term business should resume as usual. This information reaches Get to the pub.com from local Camra official Martin Perry – read more here. 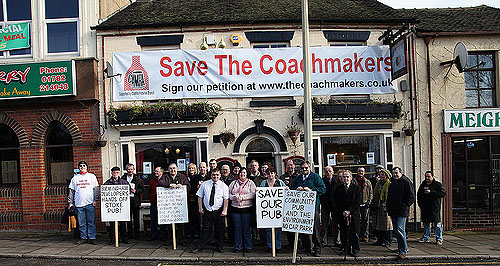 Protesters against the closure of the Coachmakers Arms, 13 February 2009. Photo: Mike Rawlins

This week in pubs begins on Thursday, when the Rutland Arms is packed to the rafters for quiz night. So when Dan and I emerge from band practice just after ten – and bump into our friend Richard, who’s just got off a train from Watford – we head up to the Red Lion instead. By day this place is popular with the staff at Sheffield Hallam University – the main reason being that it is not popular with the students of Sheffield Hallam University. Two of my mates work there, so I used to drink here quite a bit when I first arrived in this city, but this is my first visit of 2010. It’s a less academic crowd by night, although a bearded man, wearing one of those jocular T-shirts about drinking too much, sits in the corner thumbing a copy of Hamlet.

Meanwhile unwatched TVs show soundless images from Newsnight and Question Time. It’s a shame pubs don’t encourage drinkers to watch current affairs shows on big screens like Premier League football, cheering on their favourite politicians. It looks like Baroness Farsi is being run ragged by the nimble footwork of Rageh Omaar, but we can’t be certain. There isn’t long before our last bus home, but we find the time to chat about how Milton Keynes Central manages the unlikely achievement of being an even worse railway station than Birmingham New Street. (If you want to know, it’s because every surface is covered with grubby tiles, making the entire station look and feel like an enormous pub toilet.)

Saturday finds me and my band members down in Reading to play a gig. As befits a band of our stature, our first job is to leave our toothbrushes at the promoter’s house because we’re sleeping on the floor of her spare room. This task completed, we walk down to Cemetery Junction to grab a taxi into town. Then we remember that taxis don’t sell beer, so we nip for a swift half in the Abbot Cook first instead. 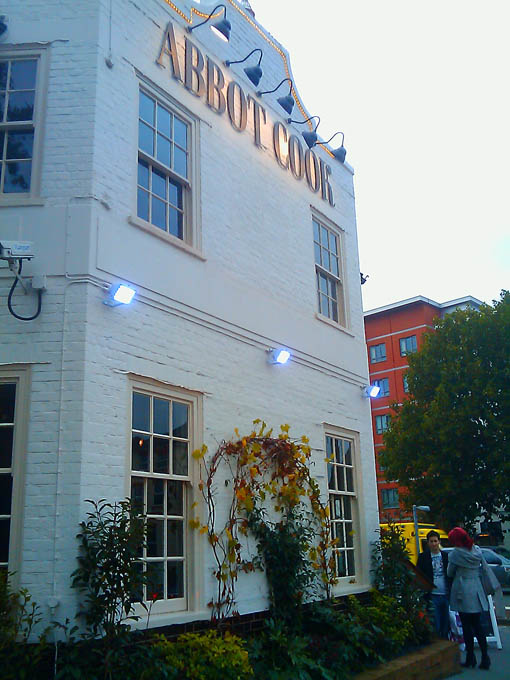 It’s very neat and tidy, very clean, and very gastro. Indeed, if you Google for the place, most of the top matches are recruitment ads which say: “We are looking for chefs to create one of the best kitchen teams in the city.” (Somewhat jumping the gun there on the bid for city status, then – albeit in distinguished company.) As well as some quite good beer, they do freshly squeezed fruit juices and a long list of wines. If I lived round here and I wanted to go out for a meal, I’d consider the Abbot Cook. But I’d never come for a night out here in a million years. In fairness, of course, I don’t think they’d want me to.

In town we hit the Hobgoblin – a name that makes you think: “I bet the bar will be staffed by men in Iron Maiden T-shirts.” This is supremely accurate, since the bar is staffed by men in Iron Maiden T-shirts. A kaleidoscope of pump clips covers every available surface – walls, ceilings, floors – as far as the eye can see. OK, not floors. But there are quite a lot of walls and ceilings, as the drinking space snakes away from a large standing area at the front into an irresistible labyrinth of snugs and tiny tables.

Indeed, it’s not easy finding a place where the five of us can sit. So one downside is that you’d have a job enjoying, say, a birthday night out here, unless you’ve got no mates. There again, it’s such a friendly place that you could arrive here with no mates and leave with dozens. We can barely scratch our elbows without a fellow drinker popping up to share a smile and an enjoyable elbow-scratching anecdote, or recommend a particularly good beer for habitual elbow-scratchers. 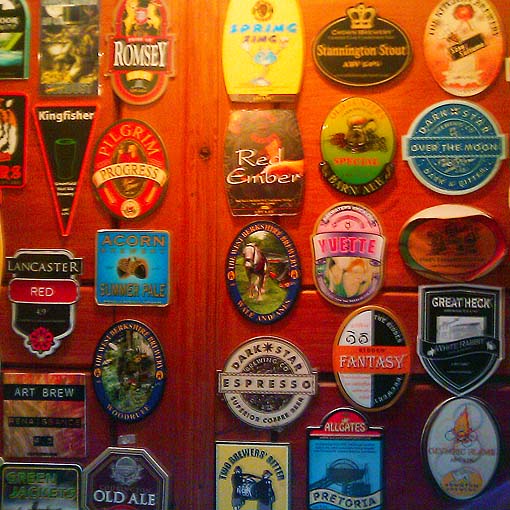 The beer is as impressive as the bonhomie, with some wonderfully rich and creamy offerings from the nearby West Berkshire Brewery. And the Hobgoblin deserves enormous credit for the way it’s served. As the barman’s pulling my first pint, the barrel ends. First he makes sure that the beer is clearing, then he asks me to taste it to make sure it’s OK, and finally he only charges me for a half, despite the expiring barrel yielding up very nearly a full pint. This, gentle reader, is a textbook bit of service. And it’s entirely in keeping with this marvellous and very distinctive pub.

At length those of us in the band take ourselves over to the Rising Sun Arts Centre (which narrowly qualifies as a pub under the infamously exacting and stringent Get to the pub.com Rules of Qualifying as a Pub: namely, can you buy some beer and drink it?). I was last here, with my old band, in 2001, and it’s only small details that have changed. The single unisex toilet has doubled up with a disabled one (presumably to conform to the Disability Discrimination Act), and the big carved wooden idol things at the back of the stage have been replaced by a sun god wall hanging thing. The beer still comes only in bottles (instead of the St Peter’s Brewery roster, there’s now West Berkshire and Hopback stuff). And the room where the bands play still feels like a youth club or a Scout hut. I mean that in a really, really good way.

It’s a balmy, Indian summer evening, and with a radiator at full blast and a wood-burning stove laden with flaming logs, the Rising Sun is staggeringly hot. The warm welcome makes it comfortable. By the time we roll out, at about half past one, we’ve had a lot of fun on stage and enjoyed the two local bands on the bill with us. We’ve lapped up seemingly endless compliments from the wonderfully affable and kind Reading punters. And we’ve eaten some Jaffa Cakes. The bar staff are great and they’re working for free, as the venue depends on volunteers to stay alive. Good place, the Rising Sun. Cherish it, Reading.

On Sunday we decide to grab a pub lunch somewhere at the start of the long drive back to Sheffield. The Packhorse is packed and charges £12 for a meal. The Grosvenor is closed because of a burst water main. So we end up at the Baron Cadogan, a Wetherspoons pub back in Caversham. It looks like every Wetherspoons pub you’ve ever been into. But, being in a respectable area of Royal Berkshire, there are delicate elderly ladies picking daintily over lunch instead of broken, pie-faced men on their fourth pint and chaser before noon.

As is generally the case in Wetherspoons pubs these days, the Cask Marque scheme proves entirely useless at ensuring the beer is served at a sensible temperature. Happily, though, because it’s a unseasonably warm day, it doesn’t take too long for the beer to reach a sensible temperature, and we make it back to Sheffield before midnight. 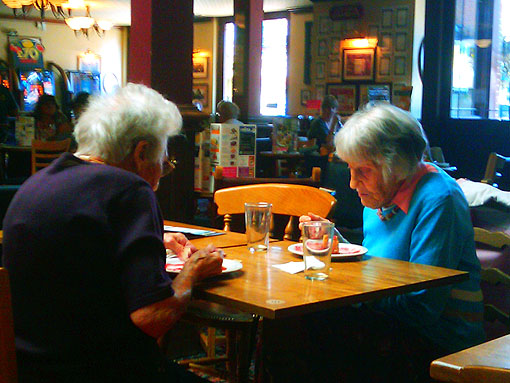