Pub visits this week: 7 (all in Sheffield)

For a few years starting with Euro 96, I would troop religiously to the New Talbot, my old local in Birmingham, every single time there was a football match involving England on TV. But since I moved away from the Broadfield last year to the other side of Sheffield, I haven’t really found a pub where I like watching the football. Are you watching the World Cup in a pub? What are your tremendous memories of alehouses and televised football? Post a comment below and tell us!

I’m trying a slightly different format with this Week in Pubs. Please also shout up with any observations you may have about this, be they positive, negative or indifferent. 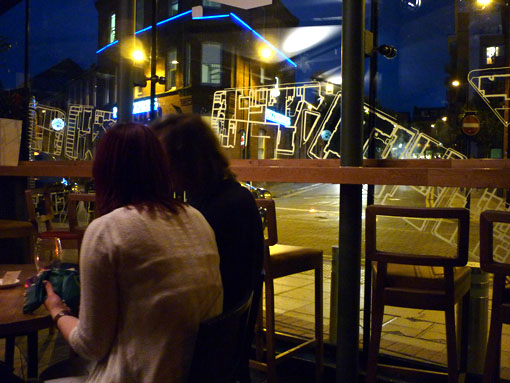 Looking out from the Forum (see below)

Monday
The Forum is described by its own website as an “award-winning continental café bar and independent shopping arcade”. The Forum is described by Get to the pub.com as some little shops selling teenage goth paraphernalia and one of those bars with sofas and tables that feel so low you might as well be sitting on the floor. There’s also a large vertical drinking section, which is where Dan, Cara and I stand to watch Blood Oranges, a charming indiepop band from Leeds. We’re pleasantly surprised to find a couple of cask ales on tap. But it’s too big a space for a charming indiepop band on a Monday night. That said, the tight-trousered careerists who take the stage after Blood Oranges do their best to fill the entire room with their groins.

We make our excuses and scuttle away to recover at the Red Deer.

Friday
It’s Friday Lunch Club at the University Arms, where the staff always manage impressively to get your vegetarian quiche and chips or your sausage and mash out in little more than five minutes, however busy the pub happens to be. And today it’s densely enough populated to make Tokyo look like Siberia.

For the evening, it’s a sweet little function room upstairs at the Harlequin, where my good friend Tonieee is celebrating his 40th birthday. I do love these sweet little function rooms above pubs, and can’t help thinking they hold the key to the nation’s economic recovery. I have a turn at DJing and manage to lose the three or four people on the dancefloor as quickly as I found them. The beer here is tremendous tonight, though I may be susceptible to bias because two of the pump clips have pictures of trains on. 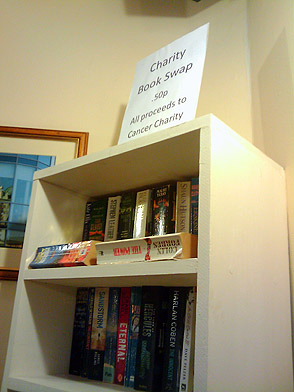 Sunday
A damp hour or so in the Walkley Cottage this afternoon. It’s never a place where I feel terribly welcome, and the vicious Mail remains the most prominent newspaper in the pub. But the landlady (I assume) at least becomes a little friendlier in manner when she sees the big family group I’ve brought along with me. Maybe we should have just taken part in the charity fundraising book swap. Or maybe we have ‘Guardian readers’ written all over us.

When long-standing residents of our city talk about pubs, they like to tell Sheffield arrivistes like me that many of them aren’t half as good as they used to be. The Springvale is one of these. And they might have a point. I have a dim memory of a night spent in this pub a year or two before I moved here, associated with wild good times and £3 treble vodkas. Tonight, Dan, Peter and I are here to watch Germany v Australia on the telly. As we replace our pints on the table between gulps, the tap of the glass echoes in the pub’s sad emptiness.

Undaunted by the solitude and the pouring rain outside, we chat about the World Cup (who scored the most goals in a single tournament; how many players in the 2006 event had ever played against Grimsby, and so on). Dribs and drabs of drinkers trickle in for the quiz and the Springvale quietly finds its soul. After Germany despatch the Aussies, we wade out to the Freedom House, where only the bar room is open, but it’s altogether cheerier than the Springvale. “Can you make it three?” I ask the landlord as Dan and Peter decide they want pints of Moonshine, the same as me. “Can you make it four!” grins a stranger standing next to me without a pint. You’re never alone at the Freedom.