Hello, readers. How’s your week in pubs been? Get to the pub.com has had a bit of a belter, discovering new places and finishing off with a trio of fine pubs around Sheffield’s amazing Kelham Island/Shalesmoor beer village. On the down side, when we finally got round to going to the newly reopened Royal Hotel, just round the corner here in Walkley, it was closed down again. Gah!

Tuesday
The Cobden View, Cobden View Road, Crookes, Sheffield; Hallamshire House, Commonside, Sheffield (featured here). It’s Tuesday night, it’s Sean Club, and it’s a first-time visit to a Crookes pub of glowing repute (see also: The Princess Royal). The Cobden View seems a good pub. It also seems a bit too popular tonight: it’s quiz night, it’s absolutely rammed, there’s nowhere to sit, and I’m feeling too old to stand, so Dan, Tonieee, Dobbie and I just have the one quick pint and head onward to the Hallamshire, where there’s always likely to be a chair available. Get to the pub.com has realised something about the Hallamshire: there always seem to be about the same number of people here, regardless of the time of the day or the day of the week. It’s never empty but it’s never what you’d call busy. I’ve recorded my admiration for this handsomest of pubs many times and really can’t fathom why it isn’t as popular as the Cobden View seems to be tonight.

Friday
Red Deer, Pitt Street, Sheffield. A couple of drinks at lunchtime and a rare chance to see our friend Mary Ann, who’s visiting from Japan for a few days, which you don’t need to know but I’m just telling you to give you the impression that I’m a cosmopolitan sort of person with friends who live in Japan and that. Everyone’s lunch looks great. They seem to have stopped doing the veggie cottage pie though, which in Get to the pub.com’s digital e-book is tantamount to treason.

Rutland Arms, Rutland Street, Grimsby, Lincs (featured here). Speaking of blasphemy against all that is good and holy ‒ which seems as apposite a topic as you can get on the first day of the Easter weekend ‒ Grimsby Town Football Club have moved a match to a Friday. It’s not a 3pm bank holiday kick off, though. No. It’s a Friday night. They do this with three or four games a season and nobody knows why, probably least of all the people who decide to do it. You don’t need to know this either but there’s nothing very much happening in the Rutland, where we roll up before the match. Apart from the priceless looks of astonishment from three or four Grimsby lads on the pool table as they behold the sight of an actual female ladywoman playing the slot machine. 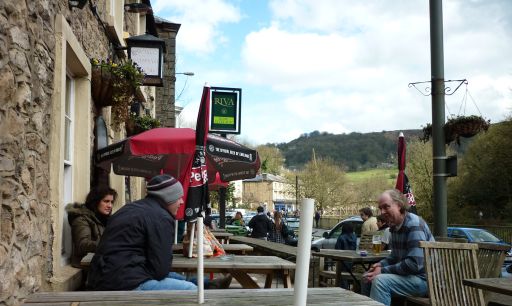 Outside at the Rose Cottage in Matlock Bath (see below)

Saturday
Rose Cottage, North Parade, Matlock Bath, Derbys. Some vegetarians tend to criticise eating establishments that only offer one vegetarian option. Credit where it’s due, I say: at least they save us time deciding what to have. It’s a two-family day out to Matlock Bath and I’m breaking one of my own Rules of Pub by eating outdoors. The Rose Cottage looks and feels like an old pub but modern signage rebrands it as “Riva@Rose Cottage”, which suggests gastropub aspirations. The menu comprises: steak pie; lots of things like steak pie but not steak pie; a vegetable lasagne. Vegetable lasagne it is, then. It arrives in a balti dish, and the balti dish is on a plate with some salad, one slice of garlic bread, and eleven chips. This costs £7.50. The sauce in the lasagne is good. The vegetables in the lasagne are those Mediterranean favourites, er, carrots, sweetcorn and broccoli.

Sunday
The Harlequin, Nursery Street, Sheffield; The Wellington, Henry Street, Sheffield; Kelham Island Tavern, Russell Street, Sheffield. A mini pub crawl to end the week, with Dan, Tonieee and Dobbie again. The first two of these pubs are great because, like the Fighting Cock in Bradford, they do loads of cask ales but without that slightly middle-class ambience that this specialism sometimes brings with it. The Harlequin seems to have run out of one or two beers tonight, though (as the new manager recently admitted can happen from time to time), so we just stop for the one. The Wellington must be up there with the best in terms of cellarcraft, as their beer always tastes as fresh as a dew-flecked spring morning (some of it is brewed out the back), and tonight’s no exception. We end the evening retracing our steps back towards Kelham Island, though, as the Welly packs up at the old-school Sunday closing hour of half past ten while the Kelham Island Tavern is keeping on while midnight. Or at least I think it is: I came out without having any dinner and I’m tipsy as an eel on my fourth pint.

Drinkers and a surprisingly pretty radiator at the Wellington