Have you ever been in a pub during a power cut? Now that I’ve been to the Compton Arms this afternoon, this is a situation I’ve found myself in twice. And there may not be much in life that is entirely indisputable, but I can confirm to you today with unshakeable certainty that there is something uniquely and inexplicably exciting about being in a pub during a power cut.

A group of eight of us have arrived in Islington to watch some bands at the Buffalo Bar. We have deliberately turned up with a few hours to spare so that we can go to the Compton, because our friend Marianthi discovered it the other week and says it’s great. Just as we’re approaching the pub, a stressed woman emerges from it, walking the other way, and asks if we’re all intending to go in. The landlady. The electricity is off, she says, discouraging us from entering. She walks off to see if it’s the whole street that’s affected or just the pub.

We dither ridiculously for a few minutes, eventually half-deciding that we won’t mind sitting in semi-darkness if there’s a decent pint on. When the landlady returns, having ascertained that it’s just the pub, I follow her inside to ask if we’re actually allowed in or not. She disappears behind the bar and away, so I talk to another, less anxious bar person, and she says of course we are; there’s a whole big room round the back of the bar we can have.

Glorious. Although it’s still light outside, it’s already twilight in the Compton. We bag a round of beers, fill two tables, and start to unwind and speak. This used to be George Orwell’s local, apparently. Normally I shrink a little from pubs with flat roofs, but the rules are always different in London. Marianthi says it feels more like a Sheffield pub, though, than the sort of place you normally find in the capital, with its U-shaped (or possibly G-shaped) layout and cosy neighbourhood feel. Other than our group, all the people in here have London accents, which is kind of unusual in London, or at least in the sort of London pubs I usually find myself in. 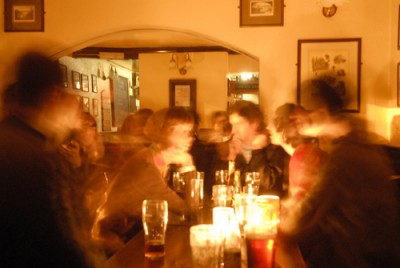 Here we all are. Photo: Michael Prince

But there’s something about the composition of our group that makes me happy. Twenty-odd years ago I used to fidget around my bedroom, impatient to escape those smalltown horizons, and now I’m sitting round a table in London, not just with people from such exotic destinations as Leeds and Dudley, but with a Peruvian, a Greek, an American and a couple of Swedes into the bargain. Just to keep my feet on the ground, there’s also my friend Emma who I first knew from when we were teenage goths back home in Grimsby. These days even she’s in the best band in the world, though, so anything at all must be possible.

And then, marvellously, a man emerges from behind the bar, introduces himself as Scott and sits down to show us a trick.

Scott is the landlord. He and the landlady are leaving the Compton in about a week’s time. He carries a varnished, mounted block of wood with fourteen holes in it, and fourteen six-inch nails in the hole. Do we think he can balance all the other nails on just one? We sort of suspect he can; otherwise he wouldn’t have asked, but it’s no less spectacular for that. All to do with cantilevers, apparently. He used to go round pubs doing this trick years ago when he didn’t have much money, he says, presumably because people would hand over cash when he did it (and I’m not a believer in north/south stereotypes or even generalisations, but people always coming up with off-the-wall ideas for making money is such a London/south-east thing!). For a final flourish, Scott tries spinning his whole interlocking structure of nails around on its wooden base, which doesn’t quite work, but we give him a round of applause anyway. He’s probably OK for money these days. 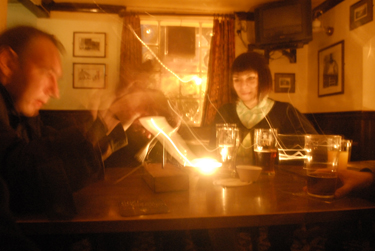 The other time I was in a pub that lost its power was about five years ago, at the Red Lion in Sheffield. It was a winter afternoon, snowing outside. Again, the landlady lit a candle on every table. The pumps didn’t work so we had to drink bottles. Every last person in the pub secretly thought it was brilliant. A power cut in the pub is a bit like when it was snowing everywhere a few weeks ago: people start saying hello and talking to each other when they wouldn’t normally. Here in the Compton, everyone says it’s like the Blitz. Except in the Blitz people didn’t go round saying “oooh, it’s like the Blitz!” and there were bombs and things. But apart from that, it is exactly like the Blitz.

Scott’s nails trick combines with the delicious, restrained giddiness induced by the power cut to create one of those random, spontaneous and marvellous experiences that happen in the pub from time to time. They don’t make you a wiser, better person. They might not even amount to a story that you can retell without admitting “you had to be there” at the end of it. But they stay with you. They stay with you and you remember them every so often and they make you think how curious and rich and unpredictable life can be, in these small but intangibly meaningful ways, if you only get to the pub and let these things happen instead of drinking cheap cans from Tesco on your sofa and watching The X Factor.