After its seemingly traditional mid-winter break, the popshow season is back in swing good and proper, with the result that Get to the pub.com is now reporting regularly on the places I go to watch bands alongside the places I just go for a sit down and a chat. As it turns out though (see below), there’s kind of a big overlap between the two.

Bristol! Oh I love Bristol. But why were the ales off nearly everywhere?

Wednesday
Red House, Solly Street, Sheffield. Last week on Get to the pub.com we talked about the difference between pubs that put bands on and purpose-built music venues. The Red House is a pub just outside the city centre which has redesigned and reinvented itself as a music venue, so it has the best of both worlds: really good sound and light and what have you, but with the intimacy and atmosphere of a little local pub. With pubs out there dying for custom and would-be promoters out there desperate for places to put bands on, I’m surprised more pubs don’t try the same thing, or at the very least get a live music licence for their underused function rooms. Tonight Rose Melberg, The Middle Ones and Plouf! are playing and the Red House is just perfect for all three.

The Middle Ones at the Red House. They were ace

Thursday
Union Hotel, Union Road, Nether Edge, Sheffield. You know usually, when you order a meal in a pub, and you don’t ask for salad, and they give you it anyway, and then you don’t eat it? I’ve just ordered a meal in the Union and asked for salad, and they didn’t give me it, but I would have eaten it. You may not feel better for knowing that, but I’d have felt better for eating it, because cheese sandwiches and chips has to rank as the unhealthiest possible combination of foods you can get without eating meat. You don’t really want to go back to the bar and say where’s my salad though, do you? I know I don’t.

Lunch in the Union is really not about the food anyway. It’s about the quiet walk through Nether Edge. It’s about listening to the locals discuss the football and the weather. It’s about necking a nice pint of Landlord and wondering if there’s time for another one before I go back to work. (I usually compromise and have a half.) And it’s about going back to work with a smile. There can’t be too many things in this brutal and bustling old world that can do that.

Friday
Hallamshire House, Commonside, Sheffield (featured here). When Cara suggests a place to meet at half past five, I have my doubts about her choice of the Hallamshire; as beautiful a pub as it is, I can’t see it being anything but dead. Wrongo! Sure, it’s not heaving, but there’s enough company: a row of contractors along the bar, a square of students at the next table. The telly’s on in the corner again and I’m distracted from talking by Jamie Oliver rolling puff pastry. Jamie Oliver. He’s so cool, isn’t he? He even makes rolling puff pastry look cool. How do you do that? Don’t you wish you were him?

On the way home, at about eight o’clock, I stop off at Commonside’s fantastic, and fantastically named, New Cod on the Block chippy. Two or three pints in my belly and chips, mushy peas and battered Quorn sausage for a late Friday tea. What a grand little life.

Saturday
The Old Fish Market, Baldwin Street, Bristol. Regular readers of Get to the pub.com will be aware that my football team, Grimsby Town, have been having a monumentally rubbish time of it, and of course that pubs play a key role in consoling the woes thus incurred. True to form, Town record their first win in a record 26 attempts while I am marooned hundreds of miles away at the other end of the country, playing a popshow.

This is my second visit to the Old Fish Market. It’s a case study in how a big pub with big screens for the football can still be half decent. There are are a handful of good beers, there’s a menu of Thai food, and there’s a huge fish market mural all the way along one of the end walls. A bunch of Tottenham fans are watching their team on the telly and chanting and clapping at the screen. I’ve never understood that. Clapping at the screen, I mean, not supporting Tottenham. Although when the result comes through that Grimsby have beaten Shrewsbury 3-0 I stand up and do a little ass-shaking shimmy, to the immense embarrassment of my understanding bandmates. 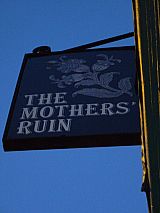 The Mothers’ Ruin, St Nicholas Street, Bristol. This is where we’re playing the popshow. It’s a tall and narrow two-storey pub, where the stage slots awkwardly into a corner at the top of some stairs. Indeed, when I played here last summer, the stage was at the other side of the room; it doesn’t really fit comfortably on either side, and this is another example of a pub that puts on music rather than a purpose-built music venue. But purpose-built music venues are almost invariably awful, and I had a great time playing here last summer and I’ve had a great time again now, despite or perhaps because of the ales being off so I have to drink Newcastle Brown, and later Jack Daniel’s. Also there’s a dog that looks like Phil Lynott. You really can’t argue with a dog that looks like Phil Lynott.

Sunday
The Cadbury, Richmond Road, Montpelier, Bristol. A cheeky ten-year-old comes up to the bar and points to a screen behind the bar with a CCTV feed from outside. “Your camera’s broke!” he says. There are lines across the screen as if the lens is cracked. The bar staff tell him it’s actually a spider’s web across the camera. He won’t have it. “No, it’s broke!”

I love Bristol for quirky little sloping buildings like this. It feels centuries old and it’s just tucked away unassumingly on a suburban residential street without making any sort of a fuss. If it was in Nottingham they’d paint it green, call it the Robin Hood and invite the entire population of the United States of America. The beer is expensive, and the ales are off, so I have to sup Guinness. I’m starving hungry from being stuck playing guitar and singing all day, recording in a home studio round the corner, and they’ve run out of all the nice food on the menu. But I’m still charmed by this pub and want to come back next time I’m in town.

The Anchor, Gloucester Road, Bristol. Desperate for a meal before the train back to Sheffield, we pile into the first place we find that’s still serving food. It’s another of yer big screen Sky Sports pubs. The ales are off, so I have to sup Guinness. And I think I’ve had the first ever chilli that doesn’t actually contain chilli. Or any spices at all. It’s an unfortunate low point on which to end a fine week of pubbing, because the girl behind the bar is all smiles but the pub is as bland as the meal.