When is a pub not a pub? This week Get to the pub.com tiptoes through a minefield of taxonomy in deciding whether to include such premises as dedicated live music venues (as opposed to pubs that put bands on, which is where I usually see live music). In the end I’ve decided I might as well just count as a pub anywhere that sells beer. This seems to me the only way to avoid problems and conflicts of classification later down the line. And at some point it will give me a great opportunity to slag off rubbish expensive wedding venues in the middle of nowhere.

Congraddies, meanwhile, are due to the Kelham Island Tavern here in Sheffield, which has become the first boozer to retain the title of CAMRA UK pub of the year. I can’t see anyone objecting to that.

Lastly, thanks to Marianthi for the new banner photo, and the pic of the Hallamshire below!

Monday
Hallamshire House, Commonside, Sheffield (featured here). It’s as nice as ever in the Hallamshire and this may be the first time I’ve ever watched Coronation Street in the pub. 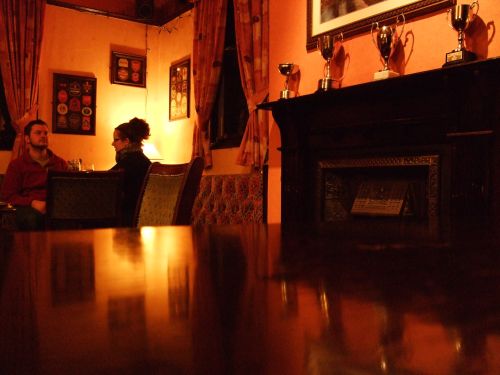 Princess Royal, Slinn Street, Crookes, Sheffield. Now here’s a decent pub quiz. There are only 20 questions, and it doesn’t start until 10 o’clock – but that gives you time for a natter first, so it’s the best of both worlds. The questions are a good mix and a good stretch, and there are free sandwiches and chips (and bits of chicken, if there are any carnivores reading). The only thing not so great is the prize (singular): six pints of Tetley bitter. But hey, we get 14 out of 20, and the winners get 16, so we don’t have to drink it. The Princess Royal is also as friendly as it is elegant. One of my new favourite pubs.

Tuesday
Rutland Arms, Brown Street, Sheffield (featured here). Oooh, they’ve taken all the old framed gig posters down from the walls. I’m meeting Mark when he finishes work so we can head over to Cleethorpes for the football; he parks his car near here of a morning and wants me to meet him outside the Rutland, but it’s far too cold to stand around on the street. Besides, slipping inside the pub gives me the chance to enjoy a gorgeous pint of Coal Porter from the admirable Spire Brewery down the road in Chesterfield: smooth as a freshly ironed shirt, with a cheeky undertone of ginger.

There are no other customers and the gaffer is talking about beer festivals to someone who sounds like he might be part of the new management at the Harlequin over Shalesmoor way. Meanwhile, this is also a Get to the pub.com first: my use of the present tense is for real this time, as I’m typing these words on my netbook while I’m actually sitting in the pub! It’s like Eastenders going out live for its 25th anniversary, except without a wobbly camera and Jack stumbling over his lines.

Rutland Arms, Rutland Street, Grimsby, Lincs (featured here). “They’re in early. Can’t bear watching that lot sober,” is how our arrival is greeted by a Rutland barfly. It sounds like a joke about the Grimsby Town football team being rubbish – and, in fairness, a reasonable point; it’s no joke sitting through 90 minutes of sheer crap without at least a couple of pints inside you – so I acknowledge it with a rueful smile. The joker glares back into my face with icy eyes and no expression at all. OK then.

We sit down and I grimace my way through a ropey pint of Murphy’s before two bottles of Newcastle Brown and a double whisky, and don’t look at me like that, because not only are we going to watch our team lengthen their all-time club record sequence of games without a win: we are doing so in freezing temperatures made worse still by a fierce Arctic breeze off the North Sea.

Friday
Roxy Bar and Screen, Borough High Street, London. It’s London Popfest and we’re watching a film! I dunno whether this place is a bar with a cinema screen or a cinema screen with a bar, but it does the job well enough.

Compton Arms, Compton Avenue, Islington, London. Oh you beauty. Look out for a full-length feature on the Compton on Get to the pub.com next week, hopefully!

Buffalo Bar, Upper Street, Islington, London. There aren’t a great many London venues I’m fond of, but this is one. I’ve had some good times playing here and some good times watching other bands, like tonight.

The next day I wish I was a bit less fond of the Buffalo Bar, so that we hadn’t all stayed there until 4am. But it’s not a night I’ll forget any time soon. Or at least the parts I can remember.

The Famous Cock, Upper Street, Islington, London. A pub with big screens and big empty spaces where its personality should be. You can’t call it terrible because ‘terrible’ implies some sort of character. It’s just a sort of nothing, with only its location to recommend it. I’ve been here no end of times to get a pint and meet people before gigs at the Buffalo Bar. Now I’ve discovered the Compton Arms, I might not need to any more.

Saturday
Blue Posts, Newman Street, London. Do we tend to over-praise Samuel Smiths pubs in London because they’re so cheap? Twenty or so indiepop fans gather here before the all-dayer part of the Popfest round the corner, and we keep coming back all day in between the bands, so we can pay £1.90 a pint instead of about double that at the 100 Club (see below), and all of us have nothing but the kindest words for this place. I mean we’d probably conclude we were in the best pub in the world if someone set up a bar in roughly the same location, at roughly these prices, in an unlit cargo container smelling of rotten meat. But the Blue Posts is genuinely nice and atmospheric: dark wooden panelled walls, good beer and nice service. Sam Smiths: they’re like Wetherspoons with a soul.

100 Club, Oxford Street, London. Exactly the sort of London venue I can’t stand, too big and too sodding expensive (a pint and a vodka lemonade: eight pounds something). Fabulous bands like these deserve so much better. Not that I’m blaming the Popfest organisers at all; it’s just a job finding anywhere at all half decent in London. Nice bit of graffiti in the bogs though, where successive scribblers have annotated the previous offering; that’s one thing London does do better.

THE GOD MACHINE
THERE IS NO GOD SO RAGE AGAINST THE MACHINE!
BLIMEY, AND I THOUGHT THERE WAS. SHOWS HOW LITTLE I KNOW!

Sunday
The Crown, Hatfield Road, St Albans, Herts. I’ve spent enough time down south to understand that people round these parts like their beer served with no head. Bar staff, I find, are also quite happy to serve mine with a head when I ask them to. This time I just forgot. So fair enough; that’s one thing that isn’t their fault. But it takes 20 minutes before my pint of Young’s bitter is no longer too cold to drink. Why does this seem to be happening everywhere these days? We won the beer wars, but if the ale keeps getting served as cold as lager then we’ll have lost the peace. I blame that Wetherspoon bloke.

The Crown, then, is a standard issue large Sky Sports bar, short on character and disturbingly loud on TV volume, which, when the adverts come on, seems to elevate from the merely thunderous to the truly seismic. The bar staff are nice, it’s convenient for the railway, and the spicy beanburger ain’t bad. There are worse pubs in St Albans, and there are much better ones. This one serves a purpose.